How long does time take

3 years to almost the hour.

I think it was around 11pm when we got the call.

'You'll want to get to the hospital right away.'

I remember the nurses ushering us into a holding room. I remember the doctor telling us nonchalantly that they couldn't keep him breathing. That they brought him back and lost him again. REPEATEDLY. And they needed to know ' Do you want us to stop'.

We told them to stop. That his poor body had had enough. Then we waited for my brother and his wife to get there. Waited knowing that we would have to tell him dad was gone.

I remember the sobbing when we told him.  They let us see him one more time. There had been blood in his beard from removing the feeding tube.....and they shaved his beard.

He didn't look like my Dad.  I remember telling my nephew that 'Pappy would look different at the funeral.

My dad was one of 8 kids, after he passed we were bombarded by his sisters....trying to surround us with love but at the time it felt smothering.

Today was a hard day for me. Everyday is hard. So much has happen in 3 years. He missed so much. We've missed so much. Some day's I still think that he'll show up. That he's just been traveling and now he's back. I know that wont happen. But it sure would be nice. 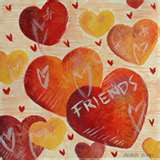